With them being green (which always seems to go down well with guinea pigs), very water based and low in sugar, they should go down pretty well with my guinea pig.

So today, I gave ‘Rocket’ a treat and put some sliced cucumber in his bowl. I chopped up a couple of slices (a bit too much in hindsight). Check it out here

Needless to say they went down very well and was gone before I knew it. Guinea pigs love cucumber and it is commonly known as one of their favourite foods.

Its pretty tempting to make them a regular part of their diet as they love it so much.

But this isn’t a good idea, as too much cucumber is really too much of a good thing.

Here are some facts about cucumbers and guinea pigs that I picked up which will help me in the future. 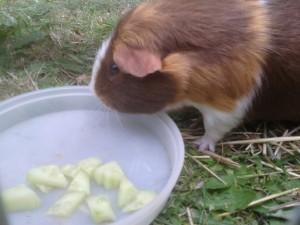 Cucumber skin is great for guinea pigs to eat, and they will really appreciate it as well. As with cucumber, not too much though and they will be fine.

Yes, cucumber seeds are fine, just not too much. They are quite squidgy so will be fine for them to digest.

Can guinea pigs have cucumber juice?

No, steer clear of this as it will hurt their tummies. Their regular drink should be fresh water only.

Cucumbers are definitely a treat for my guinea pig, but only once or twice a week to protect his tummy. He absolutely loves them!