Guinea pigs are some of the cutest and best pets that you could have. If you are looking for some fun and interesting facts about guinea pigs to help with a homework project or maybe you are just really interested in them, then here are 50 Fun Facts About Guinea Pigs for Kids to get you started.

3. Did you know that a baby guinea pig is called a pup?

4. You can tell that a guinea pig is happy because they ‘purr’.

5. Guinea pigs need to drink water to stop getting thirsty but actually get a lot of water from eating grass.

6. Guinea pigs are not actually pigs. They are rodents. 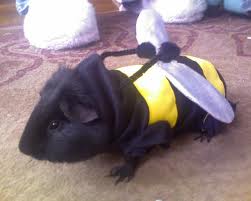 7. Guinea pigs will eat all day and night.

8. They are vegetarians and love green grass and vegetables

9. When they sense their owner is nearby they will squeak to get their attention.

10. They are very social animals and love the company of others, even humans.

11. They do not bite in defence and will only bite because they think your hand is food.

12. They need a supplement of vitamin c as they do not produce it themselves.

13. Guinea pigs love to be held as they love contact.

14. After they are born, male guinea pigs need to be taken away from their mother’s as they may try and mate with her after a month.

15. Guinea pigs really don’t like the weather when it’s really hot or really cold, they like it somewhere in-between.

16. Guinea pigs are really easy to handle as they are very tame.

17. When you are holding a guinea pig, the way to settle it down if its wriggling too much is to bring your hand under its back-side and it will stop wriggling.

18. Why are guinea pigs called guinea pigs? Some people think that the term ‘guinea’ is actually a mispronunciation of the country of ‘Guyana’ which is in south America where Guinea pigs come from

19. Guinea pigs have the ability to live on their own up to 5 days after being born.

20. The amount of time that a guinea pig is pregnant for is 70 days.

21. A female guinea pig (called a sow) is able to produce a litter of up to 4 young guinea pig pups.

22. They tend to breed in the summer months.

23. Did you know that doctors in the Andes mountains in South America have been known to use guinea pigs to find illnesses in people? What they do is to put the guinea pig up against the sick person and it will let out a squeak when they close to where the disease is.

24. There are places in South America that eat guinea pig for food

25. Did you know that guinea pig pups can run after 3 hours of being born?

27. Did you know that another name for a guinea pig is a cavy?

28. When they live in the wild, guinea pigs go around in herds.

29. Did you know that Guinea pigs don’t need to sleep for long periods? Instead they prefer to take short naps throughout the day and night

30. You can tell that a guinea pig is relaxed because they stretch out.

31. Did you know that guinea pigs teeth are constantly growing? They always need things to gnaw on to grind them down so love eating coarse foods like grass and hay

32. Did you know that guinea pig ears are very sensitive to noise and do not like any loud bangs? 33. Guinea pigs need their nails cut on a frequent basis to stop then growing into their foot.

35. The world record for the longest ever living guinea pig is 15 years.

36. Did you know that when guinea pig pups are born they have all their fur? Guinea pig pups also have their eyes open, have claws that they can use and are able to eat solid food.

37. Guinea pigs can’t sweat like humans can and so can get heat stroke if they are left out in the sun or become too hot. They love to sit in the shade whenever possible.

38. Guinea pigs are fragile creatures and so need to be treated with gentle hands. If you are rough with them they could break bones.

40. Guinea pigs have a very good field of vision and are able to see around them so as to detect predators. However they can’t see anything straight in front of their noses which means they don’t see what they eat.

41. They use touch a great deal to find food and have tactile hairs around the eyes, mouth and nostrils to detect food and and to help moving around in the dark.

42. Guinea pigs were brought to Europe by Spanish sailors returning from south America during their travels to the new world in the 15th century.

43. Another thought to how guinea pigs got their name is that the name may have come from the Spanish name ‘conchinillo’ which means ‘little pig’ as when they are cooked they look a bit like pigs.

44. They have evolved to avoid predators and prey animals and not attackers.

45. Their natural habitat is grassy plains.

46. When they are in their herds they rely on each other for safety. For this reason, there are more eyes, ears and noses to sense out trouble if it comes their way and the predator has a harder time catching a herd than individual guinea pigs.

47. Guinea pigs are fast and agile and can turn without pausing.

48. They are able to memorise their tracks and grass tunnels so as to escape their predators.

49. They are able to get into very tiny cracks and crevices so you need to be careful when making a home for them as they can escape through small cracks.

50. Guinea pigs squeal when they are frightened however they may also go totally silent when frightened as well. Guinea pigs have also been known to sing by rubbing their teeth in an unusual way which indicates that it is very scared.

If you got here, well done on taking in all 50 Fun Facts About Guinea Pigs for Kids! What was your favorite fact? Let me know in the comments below.

153 thoughts on “50 Fun Facts About Guinea Pigs for Kids”