In our series on guinea pig breeds, we look at the himalayan guinea pig in particular the breed type, appearance, specific care considerations, and showing requirements that it has.

The Himalayan is a fantastically beautiful piggie breed known as the siamese cat of the guinea pig world and pretty common compared to other breeds.

Lets find out more about it… 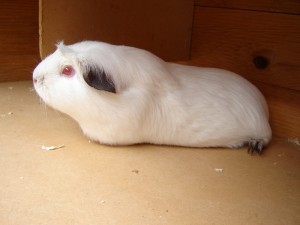 For this section, I am indebited to the Bluezak stud site for information on Himilayan showing requirements

They are very popular with breeders for show because of their appearance and ease of care.

When they are exhibited for show, the following are the standard requirements.

Head – needs to be short and broad with a profile that gently curves. A muzzle that is of good width and is rounded at the nostrils.

Eyes – need to be large, bold and bright, with good width between them. They should be coloured with black or rich milk chocolate and denser at the base of the ear. Should have bright red eyes.

Ears – they need to be large, drooping and with good width between them

Body – need to be short, cobby with good with across shoulders and body. Should be a pure white colour and not have any body pigment.

Fitness – need to be fit and of good substance, with lots of good firm flesh.

Size – need to have a good size appropriate to their age

Markings – need to be sharply defined dark and even points on face, feet and ears that are clearly marked from its white body colour.

Smut – it needs to be prominent and wider at nostrils. should be pear-shaped and carried up between the eyes. It should be sharply defined and coloured intensely in a rich milk chocolate or black colour.

Coat – Should be soft , clean and not have any guard hairs at all.

4 thoughts on “All About The Himalayan Guinea Pig”

All about the Ridgeback Guinea Pig in 9 facts https://t.co/mnPxPho1xH