As natural prey animals, guinea pigs are very used to protecting themselves against the danger of predators that may look to come into their vicinity. This is how they keep themselves from harm and ensure they stay alive in the wild.

Here are 7 ways that they look to protect themselves when presented with danger. 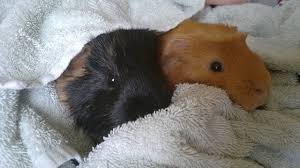 Guinea pigs are natural herd animals and will look to go around together rather than stay together.

They much prefer the company of others and will use each other to protect themselves.

When in the wild, they will for example take turns in looking out for danger and will call to the others when it senses danger coming.

2. They can sleep with their eyes open.

This keeps them able to sense danger and act immediately.

They will do this often in places where they are unsure of.

If you see them sleep with their eyes closed, this means that they are absolutely sure that there is no apparent danger around and feel secure enough to relax.

3. They are very quick and agile.

When they want to be, guinea pigs can get out of danger very quickly with their quickness.

By using their agility they can out run and out-wit potential predators.

Guinea pigs are very good at hiding and seeking shelter.

They will always retreat to cover if they can if they sense danger.

This may mean that they seek out appropriate safe places at first when they come into a new territory.

If they have no where to hide, they will often just freeze on the spot staying very still as a way of becoming less noticed to predators. It’s quite strange to see this happen, but it does work for them at times. It’s a last resort though for them.

It will also be a sign to other guinea pigs in the herd that they sense danger around.

If they are being attacked, they will look to fight back in self defence and will often bite back.

You may see this if for example you place two male guinea pigs in a cage together for the first time.

I’ve seen this happen and the other one will let out a yelp. At this point it’s time to separate the two piggies. But they can use it if they come up against other animals including humans.

As well as biting, if guinea pigs are attacked, they will often retaliate using their claws to protect themselves. I have only occasionally seen this, and it doesn’t happen often. It’s one of those ways of defending themselves that they will only use if they have to.

Even though they often use these ways of protecting themselves in the wild, they will often use them in a domestic environment so do use them to try and and understand your piggies a little better and so with that sense how they’re feeling about a situation.