So they should be ok living together right?

Nooo. Guinea pigs and hamsters should be kept well apart and these are the reasons why.

Hamsters will tend to move around much more at night and sleep during the day, guinea pigs sleep in patches and will take naps during the day and the night. They don’t have long sustained periods of sleep.

Hamsters will bite if they feel threatened. Guinea pigs will tend to run away and will only bite if they mistake something for food or in serious self defence.

The hamster will most likely end up injuring the guinea pig in some way because of this. However, guinea pigs will bite back if necessary. The most likely outcome is an injured guinea pig and a dead hamster.

3. Hamsters are solitary animals where as guinea pigs are herd animals.

Hamsters will tend to attack anything that comes into its path and can be quite vicious. Guinea pigs however are prey animals and will retreat and hide by instinct.

4. The diets of hamsters and guinea pigs diets vary quite a lot. 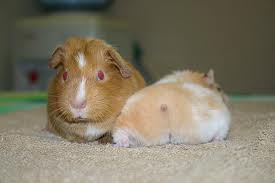 Both animals require different diets and there will be no telling which animal will eat whose food. Guinea pigs need vitamin c supplements, plenty of Timothy hay and a good supply of water.

5. Hamsters and guinea pigs are quite territorial.

Hamsters more than guinea pigs and a hamsters territory is very important to it. This can cause issues with two hamsters living together, let alone a hamster and a guinea pig.

Hamster cages are much smaller than guiena pig cages and hamsters need a lot less space than guinea pigs. However, this issue can be combated by putting them in a large aquarium tank, however this is not ideal for a guinea pig who enjoys having a good run around. Put a guinea pig in an aquarium only to keep it warm or as a stop-gap!

If you do have a guinea pig and a hamster in your home it is much better to keep them separated in different cages as it is not a good idea to keep hamsters and guinea pigs in the same cage.

This means that you can cater for their own dietary needs, they can have their own space and will be much happier than having to contend with each other in the same cage.