It is easy to think that guinea pigs sleep like humans do.

But the truth is that they do sleep but in a different way to us.

Guinea pigs are not nocturnal animals they do not have long sustained periods of sleep.

How long do guinea pigs sleep for? 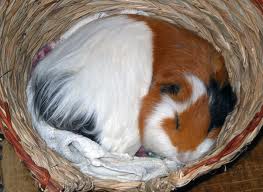 The periods guinea pigs sleep for are very short ranging from a few minutes to a few hours during the day or the night, they don’t usually discriminate.

These periods, are like human power naps, and then they wake to eat and drink before sleeping again or waking

They have to get up to eat because their bodies are built in such a way that they need to continuously eat.

So how do guinea pigs sleep during this time?

Guinea pigs have the ability to sleep with their eyes open or closed.

But the thing is that they only sleep with their eyes closed when they feel totally safe.

Most of the time they will sleep with their eyes open because of their natural cautiousness. This is because they are prey animals, so they naturally expect the worst and are always keeping alert for any predators. It’s the way they survive in the wild.

Quite often if you see a guinea pig lying down in their cage, they may well be sleeping with their eyes open especially if they are very still.

So how do guinea pigs sleep with their eyes open?

They have naturally taught themselves to do this to be in a state of concious alertness despite being in a light state of sleep. This is so they can be ready to run in case of any approaching danger.

The thing I can relate it to is my wife has an ability to hear our children at night despite being asleep and wakes instantly she hears one of them cry. I, on the other hand, have totally switched off! She has a maternal alertness to them.

If you happen to catch them with their eyes closed this is a great sign that they are relaxed and feeling comfortable in their surroundings.

A complement to you!

49 thoughts on “How Do Guinea Pigs Sleep?”

The Origins of Guinea Pigs in 19 Facts https://t.co/hIfA3EfsLU