The question of whether guinea pigs can see or not has been intriguing owners for years.

I don’t know about you, but I tend to automatically assume that animals can see the things that we do, but this often isn’t the case.

How do guinea pigs see things?

Because of the way their eyes are positioned, they can see what is around  and in front of them without moving their eyes .

Because they are prey animals, they also rely on memory to guide them, and they can recall where tracks and tunnels are in order to escape predators. This also helps them get around their homes.

How far can guinea pigs see?

They can generally see a metre in front of them but they will struggle to see anything beyond that. This is where they rely on smell and sound to sense when something is approaching them.

How do guinea pigs see food?

Guinea pigs cant however see beyond their nose, and have to rely on sense and smell to find food.

Guinea pigs are great at smelling and hearing as they can tell when food is due. In fact, they can often hear the footsteps of the guinea pig owner coming to meet them.

When they do receive the food, the way they identify it is by the smell of the food through rather than seeing it.

A guinea pig generally has poor vision, however they can see a full range of colours without any problem.

Can guinea pigs see in the dark?

There are many who say that guinea pigs have night vision and can see in the dark. This maybe true but it hasn’t been absolutely proven.

However there are some factors that prove that guinea pigs are very comfortable with the dark. 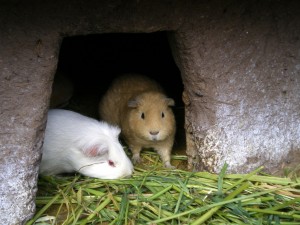 How to tell if your guinea pig is blind?

Although most guinea pigs have poor eyesight, some are blind, blind because of their age or born blind.

Here are some ways you can tell if your guinea pig is blind;

If you do find that your guinea pig is blind, then this need not be a deal-breaker.

Blindness is something that most guinea pigs get over and find a way to adapt to. What you can do to make their lives easier is to put their food, water, and play things in the same position and not move them around.

I hope this has been a helpful analysis on the vision of guinea pigs. If you have any comments, it would be great to hear from you

Can Guinea Pigs And Chinchillas Live Together? https://t.co/fcQgGwIOy3

Should Guinea Pigs Have Baths? https://t.co/AsMScIScwp