This is  an update from yesterday’s post about introducing my two male guinea pigs together and asking the question, ‘how do I get my guinea pigs to get along?’

Two male guinea pigs living together were always going to be one of the most challenging arrangements that I could make as a guinea pig owner.

Consternation in the cage

Having two male guinea pigs in one cage was always going to cause some consternation and this was no different.

I mentioned that they were chasing each other and there was quite a bit of chattering of teeth.

I was quite concerned about them and decided to separate them after a day of them being together.

So I put them each in their separate cages last night.

Both cages are attached to the main run and can be closed off. 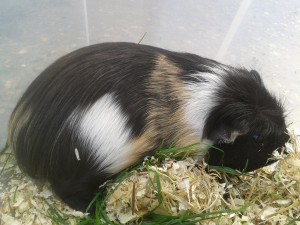 This morning when I went to see them, ‘Uno’ was trying to bite his way out of the bars and there was a bit of chattering of teeth when I let ‘Rocket’  out of his cage and into the main run.

Giving them time together again

Even with the chattering of teeth and the occasional rumbling, I released ‘Uno’ and watched them spend time together.

There was a bit of chasing but after a while, it calmed down and they got along with each other just fine.

I was relieved to see that there were no signs of them fighting.

They both made their places to rest amongst the wood in the run and they seemed quite content.

I’m pleased with how it’s going and there are good signs that the two boys are starting to get along.

These things will always take a little bit of time but the signs are positive.

Give them a place to retreat to

What’s important is that you give them their own space to retreat to.

Like many of us, piggies need their own space as well and they value it so make sure there are two separate places to go to where they can retreat to.

If you are worried about the time it is taking for your guinea pig to like the other, or that they are showing signs of not getting along, then do persist as quite often patience pays off and they do grow to like each other in the end.

Can Guinea Pigs And Rats Play Together? https://t.co/weLohXIBto