So if you have a pet guinea pig or two, then what is the best way to let them get some exercise?

You could leave them in the hutch or cage and hope that they get the exercise they need.

You could let them run around free in your yard, to give them the space and freedom they need.

However, they are liable to chew on anything they take a fancy to including plants, and are also likely to escape through any holes you have in fencing. Although they are not the fastest of runners, they do take some catching once they have got a head start ahead of you.

You could get a leash for them, but they are uncomfortable for the guinea pig and pretty inhumane.

Instead, if you have the space, it is a good idea to create a run for your guinea pigs. Guinea pigs are naturally used to running wild and exploring in long grass so giving them space to run around is highly appreciated by them.

Why a guinea pig run is important

Treating a guinea pig well and giving them variety in their day is something that really adds to a guinea pig’s quality of life.

Imagine being stuck in the same place all day and all night. Personally I would go mad.

So giving them somewhere to run around adds a nice dimension to their day. It gives them the chance to exercise, graze on grass, and get fresh air. This is especially nice, if they are usually housed inside.

1. The traditional type is a wooden frame guinea pig run upon which wire mesh is wrapped around.

It doesn’t have a base and so allows the guinea pig to graze on the grass. It is also mobile enough to be moved around the yard from place to place.

This is also nice for the guinea pig as they get to sample different areas and chew new grass. It also saves creating a build up of droppings in one particular area. 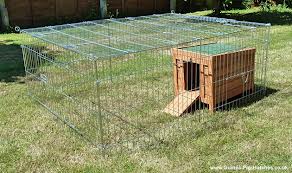 2. You can also buy metal animal cages that can be used as runs for the guinea pigs as well.

They provide ample space for your guinea pigs and are just as good as a wooden framed guinea pig run and can even be more flexible as most can be folded away very easily. They are also very quick and easy to assemble and disassemble and easily stored. 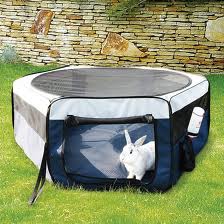 3. There are also nylon runs that you can purchase that are more modern and give your animal more cover than their metal/wood counterparts.

They are designed for indoor use to you can bring them inside when the weather gets colder and are great for giving your piggies somewhere to run in your home without constantly worrying about things being chewed or poop everywhere,

4. If you are looking for a guinea pig run on a budget, you can construct one yourself. Basically look to construct somewhere that gives the guinea pig a boundary, some good space to run and to graze as well. This can be constructed of anything that will keep them within the run and owners have been innovative in constructing runs that will give their guinea pigs a good run around, but not have to spend funds on an expensive ready-built run.

This is how one owner has approached this. She bought most of the materials on ebay.

5. If you have an enclosed space on your property that you can use then this can also be used as well. We have a patio area that we use for our guinea pigs to run around. It is nice and enclosed with low walls surrounding it and is ideal. The only thing it doesn’t provide is grazing area, so we have to provide grass and hay for them to chew on.

6. Owners have also used child’s plastic paddling pools which are cheaper alternatives and can be purchased from toy stores. As long as they allow your guinea pigs to run around, then that is an alternative. Just make sure to provide grass and hay.

This video shows how an owner has combined one with a guinea pigs home. Quite unique! 🙂 Other considerations with a guinea pig run

Give them somewhere to retreat to.

Wherever you have the run, make sure you put somewhere for the guinea pig to retreat to such as a cardboard box.

They are domesticated animals and so being out in the wild too much can make them frightened, so having a place to retreat would be appreciated by the guinea pig.

Make sure that there is not too much space for the guinea pig to escape. By being vigilant you can ensure that your guinea pig stays inside the run and predators also can’t get in.

Try and also provide a shelter for the guinea pig

Make sure you can get access to the run as well.

Some runs give you access from the top by way of a hinged trap door which can be fastened.
At the end of the day, bring the guinea pig’s back into their usual home.

Get them back in their cage at the end of the day.

Leaving them out at night will scare them and also leave them open to being attacked by mice, rats or other animals such as foxes.

Give them boredom breakers to play with.

They will also really appreciate things to run into and to hide instead of just having an open space. You can do this very cheaply by using old boxes and tubes which they will love to play with.

Link their cage with the run

Why not let them run around all the time? C&C cages are great for this and the example above with the paddling pool allow the guinea pigs a chance to stretch their legs any time they want. Although a good guinea pig cage should give them enough space to wonder around, having a run attached will ensures a much happier guinea pig.

Whatever run you decide to go with, your guinea pigs will really appreciate it and be much happier that you have given them somewhere to run and stretch their legs.

One thought on “8 Different Ideas For a Guinea Pig Run”