Zucchini is one of those vegetables that I think I am slightly addicted to.

I love it freshly steamed or barbequed which is why its become a regular feature of the diet of our household. The zucchini or courgette as it is called in the UK, is an Italian marrow squash. These are typically cylindrical in shape and can vary deep green to almost a black colour, light green with stripes, or a deep yellow.

So can guinea pigs eat zucchini?

A quick glance at its nutritional values should give some pointers; 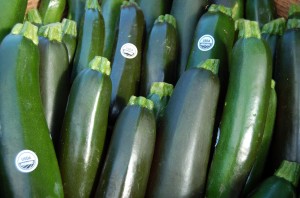 Zucchini is great for guinea pigs to eat. It is best for them to eat it raw, and it is very nutritional containing low amounts of sugar, salts and sulphur. It also has a reasonable amount of vitamin c.

In fact, because its so good for guinea pigs, guinea pig owners regularly include it as part of the piggies staple diet.

What about other parts of the zucchini and also different types of zucchini foods?

I’ve attempted to be as detailed as possible, trying to anticipate every kind of question no matter how obvious, so as to be as helpful as can be.

If there’s a zucchini food I haven’t mentioned or you disagree with my comments, drop me a line in the comments. 🙂

Yes the skin is absolutely fine for them to eat, and in fact they may appreciate it more than the middle part.

No, steer clear of any cooked foods as far as your guinea pig’s diet is concerned.

They can eat this, although it is a treat. As long as they like it, of course. It doesn’t really add any nutritional value for them however.

Yes, they can. They are absolutely fine for guinea pigs to eat.

Zucchini spaghetti or noodles are long strips of zucchini that has been cut into strips like spaghetti. It is often cooked and seasoned and is a big favourite in the summer. As long as it is raw and not cooked, that is fine.

If it is home made and un-seasoned and un-salted. But not the best food to feed your guinea pig. They would need it cold though.

Golden zucchini is another name for the yellow summer squash.

It has a crook or a straight neck and can either have bumpy or smooth skin. They have the same basic flavour and texture as a green zucchini, so yes they can be eaten in the same way by guinea pigs.

One thought on “Can Guinea Pigs Eat Zucchini?”