Cherries are a fruit that we sometimes have in the house mostly to put on deserts and is enjoyed by my kids as well.

They are not so frequent that we have them all time but occasionally we will treat ourselves.

So if we have them in the house, can guinea pigs eat cherries? 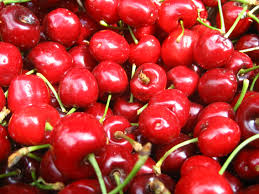 It is fine to give guinea pigs cherries.

They have plenty of vitamin C so that is a ticked box straight away as it would give the guinea pig a much needed vitamin c supplement.

However there are some considerations to guinea pigs eating cherries which I have noted below.

4 considerations to take into account before guinea pigs eat cherries

1. They are high in sugar

2. Cherries can also cause guinea pigs digestion issues if they eat too many.

3. Because they are high in sugar, they can cause the guinea pig to put on weight if too many are had.

4. They need to be cut up and the stem and stone need to be removed before serving them to the guinea pig.

They should be a fruit that is fed to them sparingly, at a maximum of a few times a week with a portion of one or two at a time.

Too many and you will have one sick guinea!

How did my guinea pig get on with them?

So….. I decided to go ahead and give my guinea pig ‘Rocket’ some to see if he would take them.

If we do have them around we don’t want to leave him out if they are okay for him to eat and if he likes them.

As with most fruits I have given him, he did take a look at them but decided not to eat them.

However, it may be different for your guinea pig.

Each guinea pig has differing tastes just like humans, and so their taste for different foods differ to other guinea pig’s.

It is perfectly fine for your guinea pig to eat cherries, but only in small portions.

They are a treat more than a staple meal and you should keep giving your guinea pig Timothy hay, fresh water and vitamin pellets as their main staple diet as well as fresh vegetables.

How have you found your piggies with cherries? Let me know in the comments