The agouti guinea pig is an amazingly beautiful guinea pig which is loved the world over for its smooth coat and distinctive ticking.

To start off here are some facts….

19 facts to introduce you to the agouti guinea pig 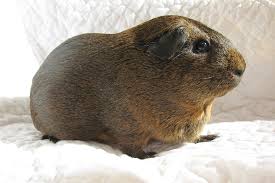 Caring for an Agouti guinea pig

Because of their smooth hair, Agouti’s make great guinea pigs for children or those who have never owned one before. Their hair doesn’t need much maintenance at all compared to other guinea pig breeds. Just make sure it gets plenty of stroking time and the occasional brush is very much appreciated by them.

They can be fed the standard guinea pig diet of timothy hay, fresh water on a daily basis, fresh vegetables and a vitamin c supplement. Lots of fresh grass would also be appreciated if you have it.

They are naturally quite shy guinea pigs but do warm to you as they get to know you, so do spend time with them when you first get them. Like other guinea pigs, they appreciate company the most and do not like to be alone, even if it is just being in the same vicinity as other guinea pigs so do consider getting another guinea pig or two to keep it company if you haven’t already.

As with other breeds, do trim their nails on a monthly basis to keep them from curling and watch for mites and infections on their feet.

The agouti guinea pig is very popular with breeders because of their beautiful appearance, resembling the wild guinea pigs of their south american heritage.

Head – It should be short and broad with a profile that gently curves.

Eyes – They should be large, bright and bold and nicely set width in between.

Ears – They should be large and drooping, with a lower rim that is parallel to the ground and set with a good width in between.

Body –It should be short and cobby with shoulders that are deep and broad.

Ticking – Should be sharp and level over the head, chest, feet and body. its under colour should be carried well down to the skin.

Belly – Should be the same colour as the ticking colour.

Coat – should be soft and silky, should be clean and short and groomed free of guard hairs

The Colours of Agouti Guinea Pigs

Cinnamon agouti’s – It has a deep rich cinnamon under-colour that has a silver ticking. its belly is a silver colour that is rich and even and has no whiteness. Its eyes are a ruby colour and has ears and pads that are a cinnamon colour.

Lemon agouti – It has an under-colour that is deep black that has a lemon ticking. Its belly colour should be an even lemon. They have dark eyes and black ears and pads.

Chocolate agouti – It has a deep rich chocolate under-colour that has an orange ticking. Its belly has a rich orange colour and it has ruby eyes, it has ears and pads that are chocolate.

Cream Agouti – It has a a deep rich chocolate colour that has cream ticking. Its belly should be cream, it should have ruby coloured eyes and chocolate pads and ears.

Golden Agouti – It has an under colour that is deep black with dark golden ticking. Its belly should be a rich and even mahogany and not have any brassiness. It has dark eyes and it has black ears and pads

Silver agouti – Has a deep black under-colour. It has a belly which is a rich and even silver. No whiteness. It should have dark eyes and black ears and pads

2 thoughts on “A Detailed Guide to the Agouti Guinea Pig”